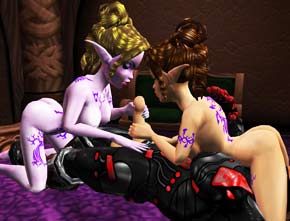 The game’s missions are introduced by cinematic cut scenes with great voice acting and off the wall premises.  Each mission unlocks new items and upgrades, as well as new types of females and even sexual positions.  You can start a sex scene with one of these ladies in any of the positions you have available, which is every position you can think of.  Every normal and acrobatic coupling is animated on screen and can be switched at the tap of a button.  Extra abilities include smacking that ass or grabbing her head for some blow job gagging, as well as hitting a button to say a random perverted line.  The sex isn’t limited to the time between missions; many missions allow sexual relations to occur in the midst of combat, and your fellow soldiers will partake as well, banging orc broads or elf babes while the arrows and bullets whiz by.  Wild scenarios of debaucherous sex during high action battles are commonplace in Bonecraft, which make it all the more unique.  In other areas of the game there are more relaxed situations of gamer controlled fucking in the form of threesomes, lesbian playtime, and orgies.

The game part of the sex is the same as in BoneTown, D-Dub Software’s previous game release, where matching a couple pleasure bars is a breeze, and shortly leads to orgasms all around.  The player’s character spurts a nice load out of his dick that spraypaints the girl’s face, or whichever body part is closest when it’s time to pull out and release.

The combat is full on arcade action.   It’s not always easy (I strongly recommend the easy difficulty setting to casual players, especially when the sex is the main draw of the game), but if you use all the tools available to you at the appropriate times, conquering each battle wave and even the bosses will be no problem.  Having a small team of soldiers, known as wranglers, helps out with the battles and makes them more fun, and also allows your character to focus on the quest at hand, or pick up power ups and health boosts.  Landscape features often get in the way of the camera which can be an irritation.  More open areas don’t have this problem, but shrubs, trees, and small structures can get in the way when trying to fight hordes of orcs.  Zooming out the camera helps alleviate this but it’s a setting buried in a menu and can’t be adjusted on the fly.

The dialog ranges from witty to crude, often at the same time.  The cut scenes are a delight, but the real comedy comes from the goofy shit the wranglers constantly spit out at random.  You can purchase different personalities for them (listed as voices) and some of them will make you cough up a lung laughing.  The Sly Stallone character is so off the wall ridiculous you will cry.  There are other classic movie character voices that are brilliantly loopy caricatures of themselves and unexpected impressions like George W. Bush mixing metaphors in the most satisfying fashion.  The enemies take on their most obvious associated stereotype; the elf dudes are not so closeted gays, and the star trek types are unabashedly nerdy.  The females have their funny lines as well but during sex they talk dirty and moan passionately.